It’s now been three weeks since I last worked on the guitar, as I’ve been away on tour. And I can’t tell you how much I’ve been itching to get back into the workshop to continue. END_OF_DOCUMENT_TOKEN_TO_BE_REPLACED

I stepped onto the beautiful historic grounds of Montsalvat and headed through peacocks and huge scary geese (it’s mating season) to the THOMAS LLOYD GUITAR WORKSHOP (www.thomaslloydguitars.com.au) to begin my 10 week acoustic guitar making course. END_OF_DOCUMENT_TOKEN_TO_BE_REPLACED

For a long while I’ve had the desire to make an acoustic guitar.

Back in year 12, as part of the HSC Design & Tech major work, I made a portable electric guitar that won a Design Tech Award, 2002. END_OF_DOCUMENT_TOKEN_TO_BE_REPLACED

This January, in boots, a flanny and cowboy hat, Jenny Biddle hit the Tamworth Country Music Festival for the first time.

Jenny joined the other 500 buskers that built up a storm on Peel St for the 9 days of the festival. In 35°C heat, Jenny set up her busking rig outside Jeans West on Peel St each day, and introduced her tunes to the hundreds and thousands that attended this year’s country music festival.

Jenny looks forward to performing at Tamworth in 2012.

10 of Melbourne’s busking finalists battled it out, playing just ONE song each, hoping to raise the most money in their busking bucket. Amidst the top buskers was Daniel Shaw, a 12-yr-old pianist, the next Billy Joel, and Don Topley, a flutist who designed a one-handed flute to compensate for his nerve-damaged fingers, as well as our very own Jenny Biddle who performed her acoustic blues version of Billie Jean to a moonwalk jiggin’ crowd. 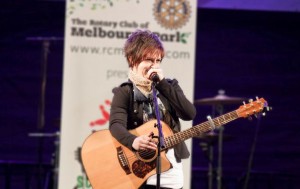 Congratulations to Daniel Shaw for scoring the runner up place for his tear-jerking deliverance of Leonard Cohen’s Hallelujah.

A big thankyou to all the people who donated and voted with their wallets. The support for Jenny Biddle as Melbourne’s Best Busker was awe-inspiring, and overall, Street Change raised more than $3000 for the homeless.

I popped into the recording studio yesterday, and was incredibly inspired. It’s been a while since I’ve been in the studio (almost 2 years since the recording of Chest of Drawers), and I didn’t realise how much I missed it.

END_OF_DOCUMENT_TOKEN_TO_BE_REPLACED

Here’s a page dedicated to resources I highly recommend!

As an independent musician, I outsource some wonderful creative people and organisations, from graphics to printing, recording, etc.

If you’re looking to create an album, website, etc, I can highly recommend the services of the following creative peeps and businesses: