I’m about to head on tour for the launch of my new acoustic album “Little Treasures”. I thought I’d get a blog happening about the tour, wins and losses, emotions (ew!), and stories for a li’l inside into what happens on the road as a travelling musician. Hopefully inspire some aspiring touring artists and take ya’ll with me while I’m away.

I leave tomorrow. I’ll be on the road in my little Yaris for a month, get back for a few weeks, then hit the road for another week. Driving all the way up to Brisbane and beyond, and back to Melbourne. It was going to be a solid two months on the road, including 3 weeks of recording in Sydney in the middle, but I decided to postpone recording to focus on the tour (what was I thinking starting ANOTHER new album before I’ve really launched this one! Keen pants or what???)

I’ve been organising this tour for the last 5 months. It all starts with a seed: fRETfEST – a Brisbane-based team who supports songwriters met me at the Tamworth Country Music Festival two festivals ago (Tamworth: the melting pot for musicians & music lovers). fRETfEST offered me dates in Brisbane in May, to host a workshop and a series of concerts. I couldn’t say no. So I begun planning a tour based around my Brisbane dates. What goes up (north), must come down (south). So the jigsaw began up and down the coast.

Planning has included LOTS of phone calls, emails, building contacts, putting yourself out there, promoting, sending mailing list updates, social web interaction, website updates and so much more. The people I’ve met on my musical travels have significantly helped in planning  a tour: “Who do I know in Grafton….” “Ahh yes, Bob the Great and his Merry Men and Women”. I’ve also been putting feelers out on Facebook to see WHERE I should go, checking where CD sales and “fan mail” come from. I’ve never performed in Brisbane before so it will be exciting to have people requesting shows up there. Germany, I will get to… one day. But perhaps I shall start small and local.

It’s somewhat scary putting yourself out there to try and get gigs in new places. They don’t know who you are or what you do, from their perspective everyone wants a gig, they are running a business, and somehow you’ve got to find the line between sounding arrogant and being too modest. Some places were definitely harder than others. Places like Byron and Wollongong have a terrific live scene, they book so much further in advance, they’re packed out and I’d missed the boat in Byron, even 5 months in advance. I imagine it’s pretty competitive. It was hard to get a foot in. Other places like the Gold Coast, Canberra and surrounds couldn’t be happier to have you and go to extra efforts to promote and make you feel welcome.

It’s massive jigsaw to put together a tour. You kinda look at the map and start slotting places in, then firing off new emails/phone calls to try and fill in the gaps. For places like Tamworth, it’s not really on the way, and may not be financially worthwhile this time around, but I’m aching to get back there and play another gig to some great friends out that way, so I’m making a special detour. It’s important to make the effort….. or why should peeps make it for you?

I’ve packed myself with dates, some concerts, cover gigs, house concerts, songwriters in the round evenings, markets, festivals, fundraisers, a workshop. Note: I’ve already done some of the Melbourne/VIC leg so I haven’t included those dates below – plus it’s hard to call that part of the “tour” when you live there and I drive down the road, play, and drive home again. But a fantastic start to the tour that was – I could do a whole other blog about how awesomely receptive and warm my Melbourne friends are. I love you!

WEDNESDAY 16 MAY :: THE ROUND @ DOWSE BAR (PADDINGTON, BRISBANE QLD)

Big gap in the tour at this point, where I will probably go home to be with my love for a few weeks, let my voice recover from too much sky-diving screaming, busk, do admin, perhaps some cover shows in Melbourne town.

Although the Yaris is a wonderful li’l cruiser, I’m going to avoid sleeping in it! I’m very grateful to have wonderful friends and family to let met stay with them, crash on couches and floors and in many cases beds. I’m crashing on some strangers couches. Hopefully they’re not axe murderers, but I guess they’ve gotta trust that I’m not one either….

Accommodation costs can really burn a hole in your wallet. I don’t like asking of others, but I have to eat my pride if I’m going to make this tour work financially. Thankfully I’ve met so many good people along the way, and have gorgeous family scattered around the coast.

Advertising can be expensive. I put a bit of $$ into the Melbourne launch – an ad in beat and what not. But most of my advertising is through Facebook, Twitter, keeping my website nice and shiny and up to date, sonicbids, using a mailing list, and word of mouth. I also sent out 65 posters to over 16 a few weeks back. It’s hard to know what works, but at this stage Facebook is pretty hot stuff! Look at you guys, all Facebook saavy! 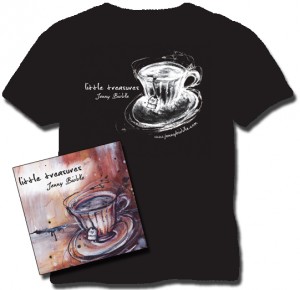 Before the tour I have 1136 facebook fans. Let’s see if there’s any rise by the end of the tour….

Pre-tour I have 133 peeps on the mailing list. I’ve just started a new mailing list recently, and am hoping to build this on tour. The beauty of MailChimp (online mailing list program) is that you can create separate lists for people in separate areas – eg. you can send emails to ONLY your QLD audience, and a separate one for your VIC audience. You can see how many people read it, how many don’t. Who clicks what? You can see what types of email subjects lines are more effective than others. It’s pretty sophisticated technology.

I’ve only really started pushing the mailing list in the last year. But it’s an important part of informing the right people. Facebook is awesome, but your notes and posts can get lost amidst the masses.

It depends what your definition of “success” is, doesn’t it? I am keen to evaluate my success after touring. But what is success?

Number of bums on seats?

Is success playing as many gigs as you can in as many states as you can?

Is success making a profit?

Or just breaking even?

Is there success in marketing and business endeavours?

Is success playing the right notes?

Making another piece of merch? Another album?

Is success based on the feedback you get from your audience in the moment?

Is success the amount of fanmail you receive?

Is success having a venue say YES they will have you?

Is success having a venue ask you back?

Is success getting into a festival?

Is success captivating an audience?

Is success based on praise?

Is success about inspiring others?

Maybe that leads me to ask what my goals are. What ARE my goals?

My goal is to reach fans both old and new, connect with them, inspire and move people, be moved, and increase the exposure of my music across the country. My goal is to not only survive financially, but to build on the career that I’ve started, thrive, and create more, do more, give more, explore more. I’m excited by the challenge to achieve lots of these things that might define success. I’m excited to grow. I’m excited to learn, not only as a performer, but as a business woman (I am NOT a business woman…… but I’m working on it), as a tour planner, as a merch bitch, as a communicator, as a human with a soul and a love for writing it in song.

And then there’s missing Melbourne.

I anticipate that I will miss Melbourne. 1 month away from home.

Then again, I have many “homes”. The exciting thing is that I get to see so many friends and family from all over the place. I look forward to that. I look forward to going to new places. But I have left people behind in my current city. It’s particularly hard for my beautiful partner. She married a musician afterall…..But it’s not terribly fun. A bittersweet tearing! We will cope! And my friends will (hopefully) be there when I return. And when I leave again. And return again. And leave again. Oh, the travelling musician!

I leave you with this rather lengthy blog and shall update you on my travels.

I plan on being transparent, letting you know numbers and figures, stories, emotions.

Let me know if there’s something specific you would like me to mention.

Thanks for making it this far!!

The Making of Ann-Marie Acoustic Guitar Complete
Select your currency