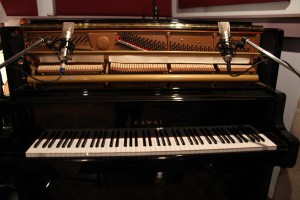 This album is a very guitar oriented album. I scrapped the only piano song I was going to do for a newer tune. I haven’t written a piano song in years. I guess I go through phases of loving the piano then loving the guitar. All my new songs are guitar-based.

The album needed some piano to fill the gaps on some songs. Somehow the piano is beautiful in bridging the gap between low bass lines and high strumming guitar parts. It just joins the whole thing together. On other tracks, though, electric guitar and banjo have done the job of adding texture.

So today we brought in a young talented chap called Beau Golden to play some piano, wurly, and organ on a few tracks. I felt reluctant hiring a session player to do piano parts, when I can play the piano. But Beau took it to another level. From funky rock organ, to sombre sounds on the wurly (Wurlitzer – some old school piano contraption thing……. VINTAGE baby!) then Coldplay love songs on the upright… it all just FIT so well.

He certainly did the songs more justice than I ever could. Sometimes it pays off to leave your song in the hands of someone else’s talents. I’ve played stacks on the album already, and I was stressing myself out thinking I need to do everything; “Oh, I need to do banjo on that track, and mando on that, and need to come up with a harmonica part for that song….” Piano was just another thing to overload my plate. Especially transposing a tune into G#. That = not fun. It woulda taken me weeks to come up with the beauty Beau came up with in 20 minutes. He showed the key of G# who’s boss. Shhh…. Don’t tell anyone, but the key of G# and me… we don’t know each other well enough to be friends. I was planning on cheating by pressing the “transpose” button on my keyboard… only to find out that producer, Sean Carey, wanted to use a REAL piano to record the “air flow” that no keyboard will ever produce, no matter how awesome the sample sound. Right he was. His piano sounds amazing mic-ed up.

Great to meet such talented and humbling musicians. It’s amazing how Beau just came in, had never heard the song, and after playing once through, he was onto it. He left space for my solos, space for my voice, space for guitar bits, and played appropriately. And when I vague out in the studio and start to fall asleep I know he’s onto a good thing. 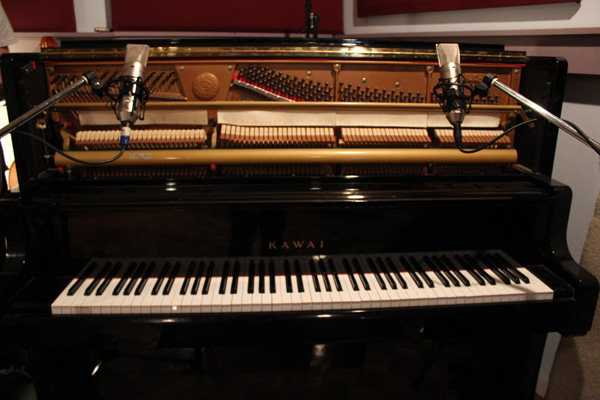 I got to have a tinker on the gorgeous piano for a song called Hide. Gosh the piano is beautiful, and the airflow, yes the airflow. As Sean says “You can’t buy that [email protected]%#”. I think the song Hide will be the last track of the album. It’s got this beautiful vibe that just sweeps you away into sleepy land.

I’ve been aching to get some pedal steel on some tracks. I reckoned it would suit so well. Sean brought in a chap called Jason Walker (Not related to Van Walker, despite the hat ‘n’ beard). As soon as he plucked a note, I wasn’t surprised to hear he’s played with Kasey & Bill Chambers. My golly. Beautiful. Another one of those sleepy land moments. He played on a track called Across the Nullarbor. It’s the most appropriate, most perfect instrument for this song. It just WORKS. It’s like this haunting figure in the background, telling the story. It’s sombre. And kinda lost. At the end of the track, we’ve played on the last chord, extending it out for bars and bars, and the pedal steel was able to just wander off into the desert… just as the story sings about.

Jason has an interesting way of approaching a recording session. He comes in and doesn’t care at all to see chord charts or know what key we’re in. He just plays from the beginning, all the way through. And sometimes you think “Wow, that’s amazing”. Sean and I were pulling faces of amazement, eyes as wide open as our mouths… speechless. Other times there were feelings of “Oh…. I think we need to pull the pedal steel out here, it doesn’t quite need it.” Beau on the piano, was more cautious about leaving gaps for the guitar, and not playing all over the voice. And although Jason never seemed to hit a wrong note and played with the most passionate of feeling and sensitivity, he didn’t leave as much space for the voice or other instruments as he perhaps should have. But that’s how he works. I suppose it’s better to lay down more than we need, than not enough. We did three takes of each song. And now it’s Sean’s job to pick the best parts from each take, fade bits in and out, and piece something magical together. I dunno how Sean does it really. Especially on a 7 minute long song. He manages to remember the best bits in each take, and cut them together almost instantaneously after the final take. It’s like he’s always on, noticing every moment. But I can’t wait to hear the finished product.

Thanks Jason and Beau for your magical talents! Wow!

I added some Bob the Banjo to The Finish Line today. Just to add that extra somethin’ something. Lucky there wasn’t too much playing. My hand cramped up. Gosh, that banjo pickin’! How do they do it! I love the texture it adds to The Finish Line! Very Mumford and Sons. Pulling off the guitar and banjo at a live gig might be somewhat challenging….

Despite sitting on my butt all day, simply marvelling at the amazing musicians in front of me, I came to the end of the day feeling exhausted…. mentally drained and overloaded! As did Sean. It’s just nuts. It’s information overload, getting people in, setting up, running through so many songs many times, chopping from upbeat to sad, this to that, discussing, planning, being aware of every moment, trying to remember what to take out and what to keep. I’m excited! But the excitement is exhausting…

Tomorrow is our LAST day in the studio. I don’t believe it. It’s been an epic journey. Part of me doesn’t want it to end. I’ve just had so much fun. Sean is awesome. The musicians are enriching. The creations are inspiring and uplifting. Who’d have thought we’d whack down an album of 12 songs in 10 days? I certainly didn’t think it was possible. Not a full band sounding album.

Sean says we’re a day ahead of schedule actually. And he says tomorrow is a bonus day. We can go over everything, add anything that needs adding. There are a couple of tracks that still need backing vocals, mandolin, and tonight’s homework task is to learn a song in the key of F# (AHH!!!! We’re not friends either) on the piano to record that tomorrow too. We might add some tambourines, shakers, go over everything and make sure it’s all sounding smashing. It will also allow us time to experiment with a few sounds here and there.

I reckon I will be feeling a mix of emotions tomorrow evening. It will feel like the biggest success and achievement, one of the most amazing experiences of my life and my musical career. I am bursting with passion. I’ve had so many goosies (goosebumps) during the production. It will be incredibly exciting to get the songs finished. Yet I will be sad… because the journey of recording will be over. For now. I’ve loved working with Sean. I don’t just love his musical, professional self, I dig him as a person. He’s been so easy to bare my soulful songs to. At the same time, there will be many new adventures to embark on with this new album in my hands. And I look forward to that greatly.

A few extra supporters helped me raise more money for this album on Pozible in the attempt to get my awkward childhood song “Kangaroo Poo” as a hidden track on the album. I’ve decided I SHOULD NOT (VERY MUCH SO) put Roo Poo on the album, as it will poo all over one of my greatest pieces of work, and anyone who doesn’t know the backstory of Roo Poo will go “WHAT THE HELL?!?!?” when they get to the hidden track. I can’t bite my pride enough to put it on the album. So, in an effort to honour my commitments, I’ve decided to record it separate from the album, and upload it to the world wide web for whenever you need a good chuckle. I’ll let you know when this happens. I am also planning a video clip of a much more tasteful song “Hero in Me”. I hope this will be a far better consolation than poo on the end of my greatest album.

Thank again for keeping up with my blogs!

Recording Diary: Day 8 – Bob the Banjo and some merry singers

Photos of Recording Album #3 – Hero in Me
Select your currency