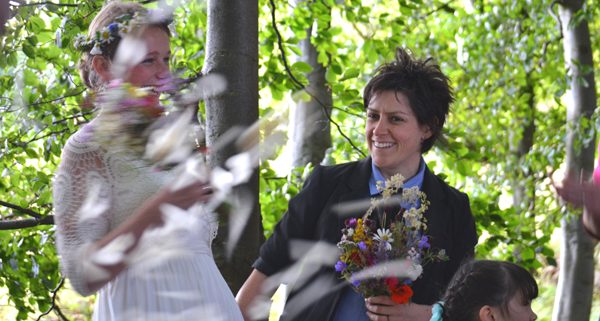 When I was 16 I thought I was the only gay girl on the planet (and that Ellen DeGeneres was a fictional character). I used to pray to God that if he wouldn’t make me straight, he’d at least grant gay-marriage and hook me up with Helen Hunt (remember Twister?). Needless to say, God did none of these. I became suicidal, depressed, anxious, riddled with an eating disorder, acts of self-harm and lied about being straight. The shame I carried infiltrated every single day.

Things have changed, even across my small lifetime. Gay marriage has been legalised across 23 countries. I am grateful for our elders who have courageously paved the way for younger LGBTQI generations. Slowly but surely I’ve watched hearts and minds change as I’ve learned to be courageous, follow my true north and love who I love. 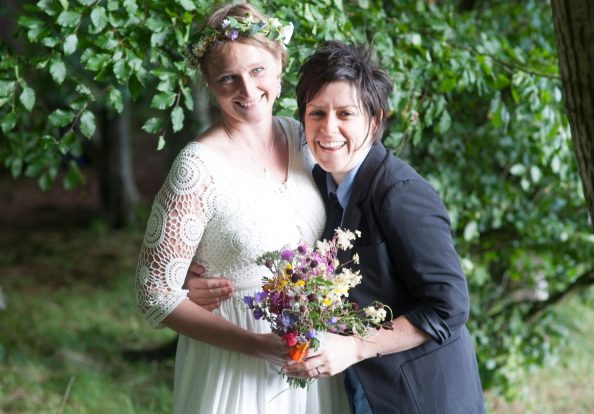 On the 3rd of August, I married my beautiful wife in Scotland. We had the BEST day. I’m proud to be her team. Pre-wedding I was haunted by the occasional reminder of my own internalised homophobia that formed from a lifespan of homophobic-flavoured government, religion and the media. At our ceremony last week, all of that shame, mumbo jumbo and history seemed to fall away in those moments where Gwendolyn & I looked into each other eyes, surrounded by loved ones, smiles, confetti, music, laughter and love, and made a commitment to each other, signing Scottish marriage papers saying “Bride” and “Bride”.

Living in Ireland and Scotland, I’ve felt this ease wash over my soul because gay marriage is legal. There’s a sense the government has your back and so do most of the people, that you’re an equal, that your love is as meaningful and as potent as the next person, that you won’t be denied access, rights, or looked upon as a second class citizen. What I’ve witnessed is that it’s actually a non-event. The laws changed, people marry; people get on with their lives. There was no apocalypse when Gwen & I married.

Unfortunately our marriage, along with many others, is not recognised in Australia.

Embarrassingly, Australia is the ONLY “developed” English-speaking country yet to legalise same-sex marraige.

The issue has come to a peak in Oz this month as society puts pressure on an out-dated government to legalize same-sex marriage. The government prepares to launch a $120+ million Plebiscite for a vote that will be non-binding. Like any other person, the LGBT Community have worked, paid taxes, contributed and enriched society and yet the government withholds their right to marry. I shudder to think of the ongoing damage it does to the mental health of young LGBTQI people, and the children of same sex couples to grow up with a government that plants seeds of shame & inequality and fertilizes their soil with disturbingly tactless messages that come up during these debates.

In 2004, with the flick of a switch, PM John Howard changed the Marriage Act to deliberately exclude gay people, defining marriage as a “union of a man and a woman to exclusion of all others”. He didn’t need a plebiscite. He just changed it.
As Magda Szubanski says – cancel the Plebecite and give money to the aged care. There are far more pressing issues that should be filling the government’s agenda. Flick the switch, make gay marriage happen, and people will get on with their lives.
It’s a non-issue.

I regret buying into the shame throughout my life… but I suppose during many of those times it was a survival/self-preservation thing, and you’re pulled into a culture of its own epic momentum. Now the culture has a new momentum. The people are ready for gay marriage. They’ve been ready for a long time. And still we put up a long fight towards fairness. I am warmed to see my Facebook newsfeed flooded with people (gay, straight and anywhere across the spectrum) changing their profile pics/banners in support of marriage equality in Australia, doing their part, standing up for gay rights.

My wedding was healing. Deeply healing.

I hope the Australian government soon lifts that wave of shame off the hearts of so many people, and allows same-sex couples to marry.

I urge you do your bit and vote.

Here’s my first “coming out” song I wrote: https://www.youtube.com/watch?v=Ka9YZTqyk00

And as Michael Moore put it, “If you don’t support gay marriage, don’t get gay married”.