It’s now been three weeks since I last worked on the guitar, as I’ve been away on tour. And I can’t tell you how much I’ve been itching to get back into the workshop to continue. 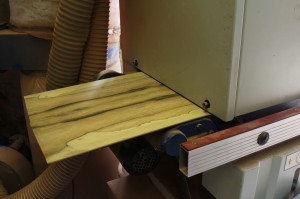 Creating the back of the guitar:

Today kicked off with shaping the back piece of the guitar. I first had to sand back board that I’d glued together (as a “book join”) weeks before, using the drum sander, to determine whether the join was neat and strong enough. 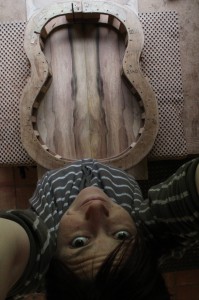 Using the template, I then traced the shape of the guitar onto the wood, considering the different positions of the template to get the “best looking” pattern for the back of the guitar. I then added another 1.5cm “danger zone” to that tracing, to prevent any accidents with the band saw.

Gluing the bracing to the inside of the back piece of the guitar:

The back piece of the guitar was clamped into a mould that would give the back of the guitar a slightly rounded back, to create a better chamber for the sound to reverberate inside. I’m told that the way you figure out the degree of the curve for the mould, is by drawing an arc with a 25 foot piece of wood. Thankfully technology, templates, experience means I didn’t have to find a 25 foot piece of wood to draw circles in the carpark with… but back in the day…..

I measured out the positions for each of the 4 pieces of bracing.

You’d think I’d be more anxious using the band saw (for fear of losing a limb), but I found more distress gluing each piece of the back bracing to the back of the guitar. It’s some seriously strong glue.

Like SUPER super glue. Once you join your pieces, you have a limited time to shift them into the correct place. And the problem with gluing each brace to the backboard, was that when you clamp down one side, the other side shifts. I needed 6 hands. I cannot make a cup of tea without spilling it, thus I struggled to apply glue without getting it all over the place, on my shirt, on the back piece of the guitar, the braces sliding all over the place. One of Chris’s favourite lines is “Keep it neat” and while in the middle of clamping, I had to wipe off any excess glue with a piece of wet cloth, wrapped around a ruler, so I could get into tight corners. So there was a little distress trying to position, glue, clamp, clean, un-clamp, realign, hold, shift, re-clamp. I need a breather between gluing each brace, hahah.

Practising bending the sides of the guitar:

I’m told one of the hardest things about making a guitar is bending a cutaway. It’s common to break the sides of the guitar. And for that reason, making a guitar with a cutaway costs more and takes more time and resources. I wasn’t expecting this time to come so soon in the guitar-making journey. 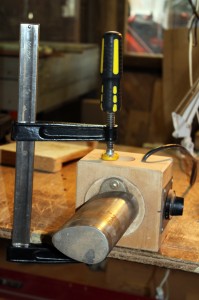 I had to practise bending scrap pieces of sassafras (of the same 2.00mm thickness as my sides) using the hand bending machine.

The hand bending machine is extremely hot. It’s clamped to the table. Chris tells me of a time one of his students suffered 3rd degree burns from misuse of this piece of machinery. It’s not to be messed with.

It’s such a skill to be able to hand bend the sides of a guitar, and there’s a lot of technique involved.

The idea is that you keep the sides of the guitar wet using a spray water bottle at all times. The intense heat of the hand bending iron dries the wood out rapidly, so you need to constantly wet the sides to give the wood its best chance of bending without breaking. 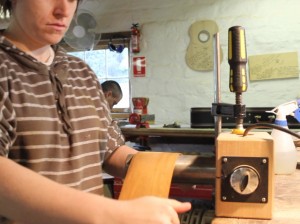 The technique involves laying the wood over the iron, and letting the weight of your hands guide the wood as it bends over the iron. You need to get a feel for the wood, and LET it bend, rather than forcing it.

The mistake I made at first was to force the wood down and around the iron. This resulted in the wood snapping in half….

It’s a slow process, and it needs to be in order for the wood to bend without breaking. Slowly you let the weight of your hands bend the wood down, then shift the wood a few mm to bend the next part around the iron, keeping the wood wet always. Listen for tears, look for breaks.

I practised this for a couple of hours, bending the wood one way, then the other, straightening it out again, starting a fresh, trying to get the cutaway to match the shape of the template.

I broke it many times. Once right through. Some part way through. Another with little tears. The biggest lesson was patience. I watched Chris do it and thought how quick and confident he was at it. There’s a lot to say about experience. There’s a definite craft watching someone hand bend the sides of a guitar. It’s such a sensitive skill. I was learning, but I have a lot more to learn. I needed to slow it down even further to work on the technique. It’s not about speed. It takes as long as it takes. And I had to be patient.

Bending the sides of the guitar:

After some while of practising, I felt confident enough to bend the sides of my guitar. Chris said my technique was looking a lot better than when I first started. Of course there was uncertainty and fear. If I broke them I would have to start the sides all over again, to select the wood, trace templates, cut them to size, sand them to the EXACT thickness of 2.00mm, not 2.01mm. I would have to bend them in the bending machine, clamp them to the template and wait for them to hold, dry, cool, set, before I could attempt the cutaway again.

So I took my time, being extra cautious. It was teaching me patience; feeling the wood, letting it bend where it wanted, when it wanted. Mind you, the hand bending iron was playing up so that was testing my patience further more as the temperature dropped and the wood wouldn’t bend….

There was a difference though, from bending the scrap pieces of wood. The actual sides were a few cm wider, making it a little tougher to bend. Sometimes it felt like it wasn’t bending at all. I kept referring back to the cutaway template, trying to bend it more and more. I had watched Chris’s demonstrations, how he would over bend the sides, then push them into the template where they could be clamped and allow them to set. 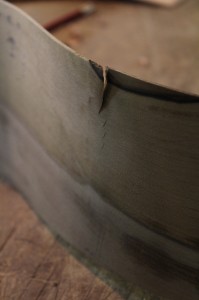 I bent it some more, then tried to compare my bend against the cutaway template.

My frustrations got the better of me…

I tried to force the cutaway into the template…. and…..

I went really quiet after that.

I held tears back, as to not cry in front of the lads in the workshop. LAME!

It was such a deflating feeling. I had broken the side of my guitar, the cutaway. To craft something with your own hands, to put all that time into something, practise, skills, resources… and… then… for it to break…. I was shattered.

Chris suggested we attempt to glue the crack back together, then bend the guitar sides back the opposite way, and create the cutaway on the non-broken side. But I had a feeling inside me that this wouldn’t work. Once it’s broken, it’s broken. There was a weak spot now in the side of the guitar, and I didn’t believe we could use it. But Chris thought it’s worth a try to glue the piece back together and see what would happen on the next day. So we glued it, clamped it, and I went home feeling seriously sorry for myself…..

BLOG: THE MAKING of the HERO IN ME VIDEO CLIP

Hero in Me - Music Video (Official)

Photos: Hero in Me Album Launch