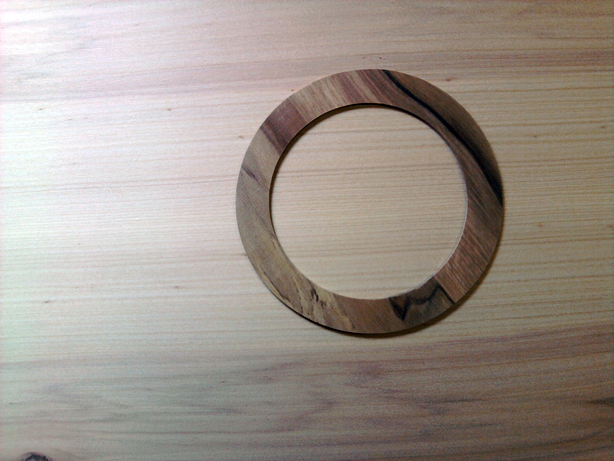 I walked through the gorgeous grounds of Montsalvat for another day in the workshop. I think the pet peacock was trying to mate with a duck. The duck did NOT look impressed. It was a little awkward…

After unclamping the soundboard, it’s a terrific to see such a seamless join between the two pieces of timber. I put it through the drum sander to get the glue off to reveal a fine piece of Bunya Pine.

Putting a headplate on the guitar head:

Before creating a decorative headplate to go on the front of the guitar head, Ifirst had to make sure the head had a flat, smooth surface. I used the linear sander to flatten the head. It’s always a li’l tricky putting the right pressure on the wood to get an even sanding. Practise, practise. 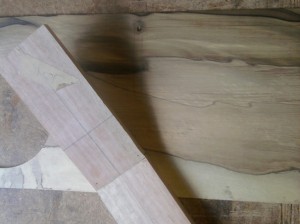 I picked a 2mm thin scrap piece of Tasmanian Blackheart Sassafras as my headplate. Lucky I’m not “one of those people” who takes forever to decide on food from a menu, cos it could have taken me hours to sieve through all the gorgeous timbers and settle on one that I liked. It’s a process of elimination really. It’s hard to know what my guitar will look like when I don’t have a decorative imagination, only a practical one. I picked one that complimented the timber on the sides and the back of the guitar. 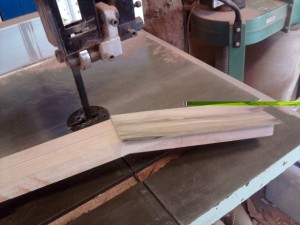 I found it a little challenging trying to then angle off the edge of the headplate, using the linear sander. You have to get the headplate as smooth as you can, to make it seamlessly joined to the head and neck. The fretboard will later be glued over this, so you need a flat plane. But in doing that, you can’t accidentally sand into the neck, or you will lose that flatness. 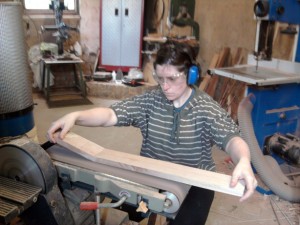 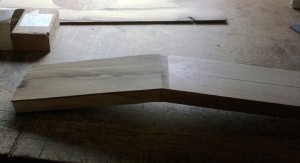 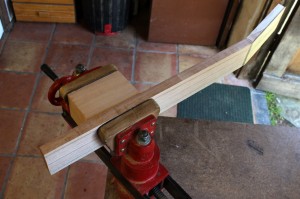 What’s a heel block? I had no idea.

To get the position of the heel block, I drew a centre line down the back of the neck. I then measured out the shape/width of the neck. The width of the average steel string guitar neck is 45mm at the nut/head, and 55mm at the 14th fret of the guitar. I talked to Chris about the width of necks, as I have little hands (yet they are the SAME SIZE as Eric Clapton’s, according to his hand mould in Hollywood) I would prefer something quite narrow. 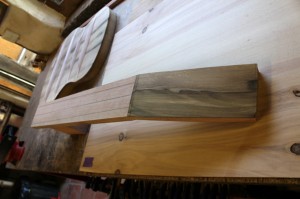 I remember learning on a classical guitar as a kid. The ¾ went alright. But bumping up to a full-size was nuts. The fretboards are so huge and flat. As it turns out, classical fretboards need to be so wide, as the strings have less tension, and they need more room to oscillate to produce the sound. Narrowing a classical would restrict the sound. But as I’m doing steel string, 45mm width at the nut is a goer, and it’s what my current guitars (Maton EA80C and Takamine 2006 Ltd Edition) are.

The heel block sits 60mm over the 14th fret, towards the saddle.

Creating the centre strips – back bracing:

I sanded fine strips of Queensland Maple, which will be used as centre strips, to be glued over the join of the back of the guitar, and in between the other back bracing. The wood, so thin, is very delicate and tends to break easily.

The rosette is the decorative inlay around the guitar sound hole.

I decided on the size of my rosette based on its relation to the body size/shape of other guitars.

I decided to use sassafras, to compliment the back, sides, and headplate of the guitar, and contrast the light Bunya Pine soundboard. I sieved through some more scrap pieces of Sassafras, visualising different patterns till I found “the one”. 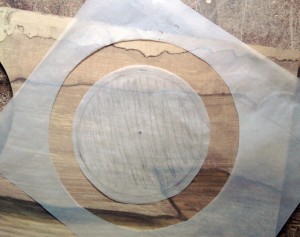 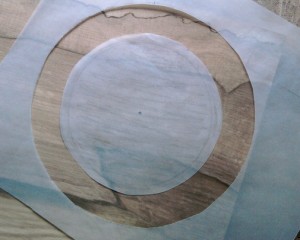 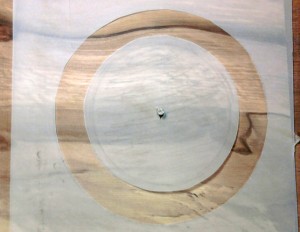 Cutting the rosette was an intricate process.

3)      Stick timber to the template board using removable adhesive strips 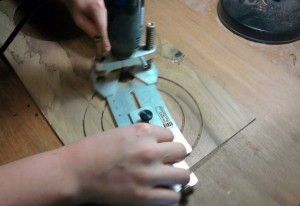 6)      Position the rosette making machine (I don’t even know what it’s called, it’s like a compass the routes out circles) on top of the drill piece, on top of the timber

7)      Set up the router so that it is the distance away from the centre (56mm radius). You have to have the router on to move it and make test cuts while you move the router into position. Always cut away from the “line” and work your way in. Better than accidentally cutting too far in, and you can’t add more wood on once it’s cut off….

8)      Once you have determined the diameter to cut, you then start cutting deeper into the wood, peeling off FRACTIONS (we’re talking less than a millimetre) of wood for one revolution. You then realign the router’s depth, to cut another revolution. 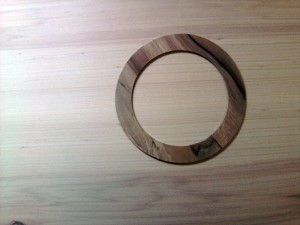 As you peel off fractions per revolution you eventually cut all the way through the wood. You can’t just cut right through on the first revolution because this could cut off large flakes of timber, ruining your rosette.

Day 2: Creating Guitar Back, Bracing, and Hand-Bending the Cutaway

Day 6: Embedding the rosette, cutting the soundboard
Select your currency